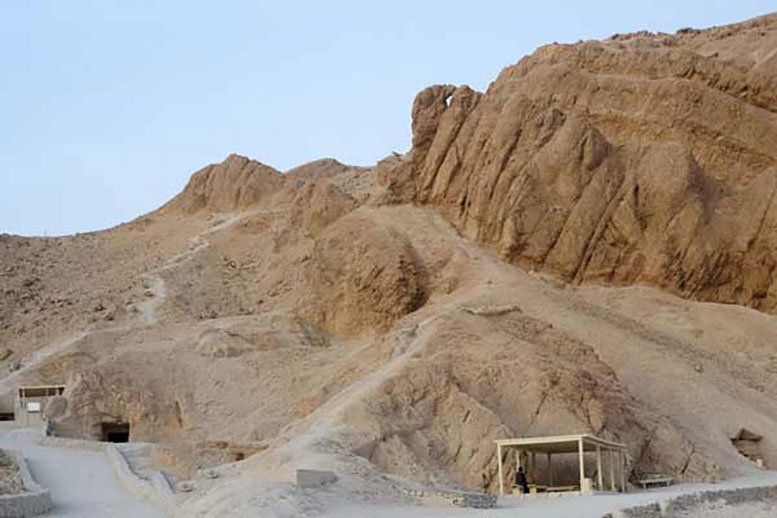 The Valley of the Queens is a necropolis in ancient Thebes and is in the south of the Valley of the Kings. Members of the pharaohs of the 17th, 18th, 19th and 20th dynastie were discovered here in more than ninety graves.

In contrary to what the name suggests, not only queens were buried here. The Valley of the Queens, the Valley of the Kings, Karnak and Luxor have been part of the UNESCO World Heritage since 1979.

The tomb of the Nefertari is also located here, which marks one of the highlights in Luxor.

Valley of the Queens

The impressive wall paintings and the complete decoration of the tomb show Nefertari’s position as the favourite wife of Pharaoh Ramses II. The magnificent tomb of Pharaoh Hatshepsut is also located on the west bank of the Nile in Thebes.

The impressive temple was carved into the rock like a terrace and is a proves great architecture. It is the best preserved monument in the necropolis.

The neighbouring wadis also contain tombs. It is not known why this place was chosen for burial. However, it is considered likely that the shape of the mountain el-Qurn was the reason since it strongly resembles a huge pyramid.

There are three types of tombs:

The graves of the 18th dynasty are mainly princes, but princesses and prominent civil servants are also among the buried. However, the simple layout of the grave complexes without decoration and painting makes it difficult to identify the owners.

The tombs of the queens from the 19th and 20th dynasties are close to real apartments that consist of two large rooms with up to five secondary chambers.

They are usually richly decorated and always have similar depictions that show the journey of the deceased into the realm of Osiris and the light of Re.

There are also prince graves from the 20th dynasty, which are long and tubular. Only the burial chamber is slightly larger.

All tombs in the Valley of the Queens have one thing in common: they lack the superstructure.

The surrounding area also does not provide any evidence of formerly existing cult buildings or grave stelae. It is not possible to ascertain exactly whether the superstructure once existed or whether there was never a tomb cult.

Another possibility: The built chapels may have been destroyed in the course of history. One explanation may be that the grave and cult building were in different locations.

The majority of the tombs in the Valley of the Queens are well documented and maintained, while some of the tombs are insufficiently documented. Protective actions have been implemented with various organizations to maintain or restore the graves.

Excavations in the Valley of the Queens took place at the beginning of the 20th century mainly through the Italian Ernesto Schiaparelli, who also discovered the well-known tomb of the Nefertari. Till today it is not clear if there are still undiscovered graves,