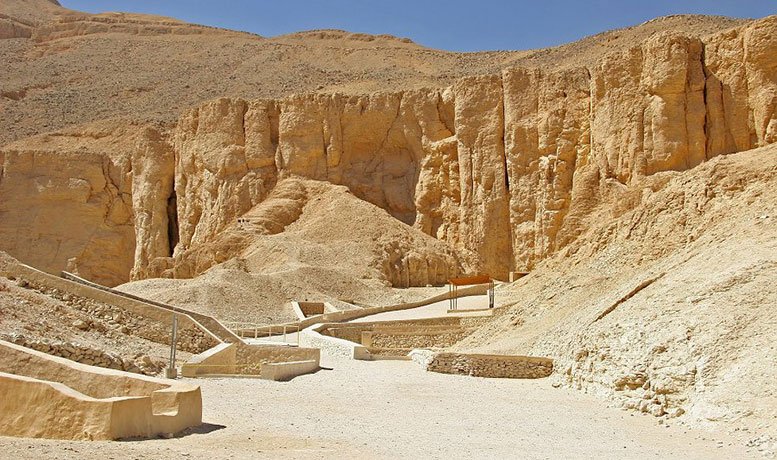 The Valley of the Kings on the west bank of the Nile is a magnet for tourists from all over the world.

The necropolis is located near the ancient Egyptian Thebes, in which 64 graves and pits have been uncovered till today, including the Tutankhamun’s tomb with its famous gold death mask, which is exhibited in the Egyptian Museum in Cairo.

Especially the rulers of the New Kingdom, which included the 18th to 20th dynasties and existed from 1550 to 1069 BC, are buried in the Valley of the Kings. Although the most massive tomb robbers and looters have tackled the tombs over the millennia, very valuable excavation finds have still been made in the Valley of the Kings. Howard Carter, for example, discovered the almost unpublished tomb of Tutankhamen in 1922 after an intensive search – it is considered one of the most spectacular finds.

Finds show that the area of Thebes was already used as a necropolis during the First Intermediate Period. Mentuhotep II built the first mortuary temple in the necropolis Deir al Bahari, which is north of Thebes. Graves of at least three kings from the 11th dynasty were discovered northeast of the valley, including Antef I, Antef II and Antef III.

Dra Abu el Naga already served as a necropolis for the burial of Theban princes during the 17th dynasty. Thebes West was probably also used as the final resting place by the rulers of the 18th dynasty, who built numerous mortuary temples in front of the mountains that frame Thebes.

These include Hatshepsut, Amenophis III and Ramses II and III.

Valley of the Kings:

The tomb of Thutmosis I. was the first tomb to be clearly assigned to be his. The tomb of Thutmose III. is also located in the Valley of the Kings, its date of death could even be dated exactly: February 17, 1425 BC.

Other tombs such as that of Ramses I, who was the founder of the 19th dynasty, and Sethos I as well as Ramses XI. were also discovered in the valley. Ramses XI.

was considered the last ruler to have his grave built in Thebes. Grave looting took place during this time and graves were also robbed in search of gold during the 21st Dynasty.

In the course of this, Sheschonq I from the 22nd Dynasty arranged for the mummies to be transferred to other graves.

Jesuit Father Claude Sicard identified the ruins of Luxor and Karnak as burial sites of ancient Thebes. He was the first person to locate Thebes.

The following discoverers of another twenty graves were Richard Pococke, James Bruce and William George Brown from Britain.

The reign of Napoleon brought more researchers and scientists to Egypt. This was the start of the systematic opening of graves, in which of numerous graves with mummies and grave goods were found.

The most sensational discovery was Tutankhamun’s grave, which Howard Carter uncovered in 1922, almost without being looted. In the nineties of the last century, the American Egyptologist Kent Weeks discovered further passages in a grave complex.

It is considered the largest of the tombs discovered so far. Another discovery caused a sensation in 2005: a burial chamber near the Tutankhamun tomb contained coffins and sealed clay pots. In 2012, a team from the University of Basel opened a grave containing the mummy of Nehemes Bastet, a singer of Amun,