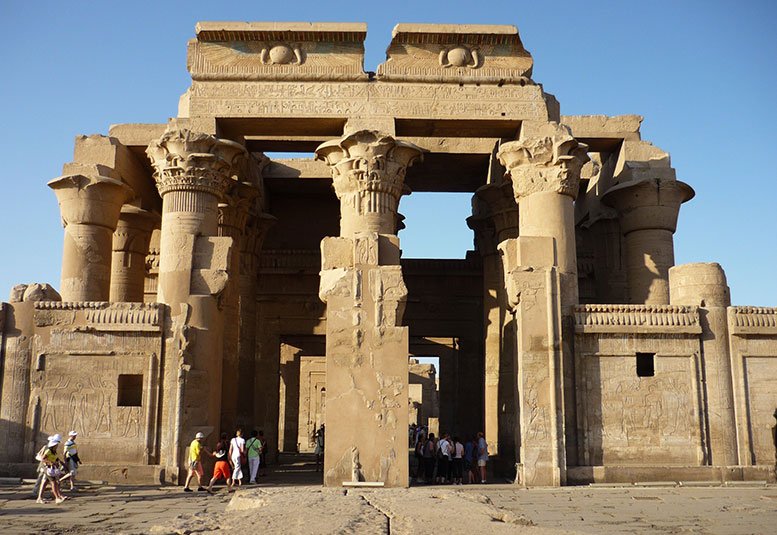 Temple of Kom Ombo is another historic sight in Upper Egypt. Located on the eastern bank of the Nile, the temple is around 3.5 kilometers southwest of the city of Kom Ombo.

As a double temple, it represents a peculiarity, because in it – unlike in other holy places of ancient Egypt – two gods were being worshiped.

Sobek, the god of water and fertility with the crocodile head, was worshiped in the southeastern part of the temple, while in the northwestern part it was Haroeris, the god of light, sky and war. Because Haroeris appeared as a manifestation of Horus, his epithet is also “Horus the Great” or “Horus the Old”.

Because of its two deities, the temple was also called “House of the Crocodile” or “Falcon Castle”. The double temple of Kom Ombo was built between 305 and 31 BC during the Ptolemaic rule.

The parts of the temple that can still be visited, date from this period as well as partly from the Roman era. However, like the Colossi of Memnon near Luxor, the temple complex was badly affected by the weather and the annual flooding of the Nile.

Jacques de Morgan first uncovered and restored the ruins in 1893. Previously, over half of the temple’s remains were covered with sand. It is believed that the building in its current form under Ptolemy VI. was built on top of the remains of other buildings.

Those buildings probably belonged to the 12th, 18th and 19th dynasties of the Middle and New Kingdom. The wall that encompasses the temple, 51 meters wide and 96 meters long, as well as the western pylon and the Mammisi, the birth hall, were destroyed by the flooding of the Nile.

The influence of the Roman Empire becomes clear from the wall paintings of the Emperor Domitian on the still existing, southeastern tower of the large pylon. As a result, he pays homage to the triad Sobek, Hathor and Chons. Behind the two entrances in the encompassing wall was a courtyard with sixteen columns, of which only the base is still preserved.

Yet, the formerly extensive decoration with reliefs and hieroglyphs can be recognized. The altar, the place of the holy barque in the middle of the courtyard, is still partially present.

On the side of the openings leading to the first pillared hall, cleaning ceremonies are depicted, the pillar shafts and reliefs of the hall show not only hieroglyphs but also scenes of the worship of gods by pharaohs, including Cleopatra.

The second pillared hall leads through the two entrances to the double sanctuary. Depictions of other pharaohs in the form of wall reliefs are shown there, too. Lastly, three antechambers follow the two sanctuaries of the gods Haroeris and Sobek.

Inside the temple, two corridors lead along the inside to the center of the temple. Behind the sanctuaries are seven rooms, from the middle of which a staircase leads up to the terrace.

Overall, the rich decorations of the double temple by Kom Ombo are striking; they are among the most important buildings of the Ptolemies and is a significant part of Egyptian history,