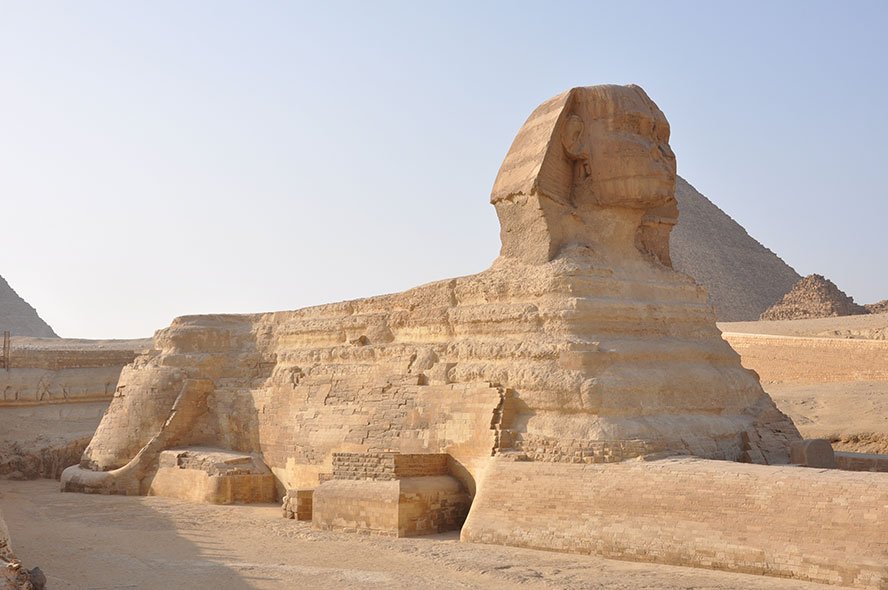 The purpose for which the Great Sphinx in Giza was built is still unknown nor is it known who the statue is supposed to represent or who is its builder. What is certain, however, is that it is by far the largest and most famous sphinx in the world.

What can also be proven beyond any doubt: their appearance is modelled on the body of a lion.

The body consists of the trunk, front and rear legs and a tail. The human head sits on the trunk of the Sphinx.

The whole monument is about 73.5 meters long and around 20 meters high. The Great Sphinx is made of limestone, which could be found on site.

It was most likely carved out of a limestone hill and is therefore located in a hole that got filled up with flying sand.

Most of the time, the Sphinx was therefore probably covered in sand, which ultimately contributed to its conservation over the thousands of years.

Although the head covered by a Nemes headscarf was the part that stuck out of the sand most of the time, it is better preserved. Some researchers therefore conclude that the head was originally significantly larger and was changed over time.

This would also explain the disproportion between head and body. However, this theory could never be proven. Since the Sphinx has undergone several restorations, it is quite possible that these were applied to the head, too.

But who does the monument represent? Scientists have speculated that the statue may impersonate Pharaoh Cheops, represented as Horus. Even who built the Sphinx lies in the dark.

Some ascribe  the monument to Cheops as “his” building, others assume Chephren as the builder. By using modern methods, other statues or images of the two pharaohs were compared to the look of the head of the Great Sphinx, but this has not led to a clear result.

It was probably built during the reign of Chephren between 2520 and 2494 BC. Right next to the Sphinx, a temple was set up from the same stone. It is also in line with the valley temple of the Chephren pyramid and is very similar in its structure. This suggests that the two temples were created around the same time as the Great Sphinx.

The cause of the broken nose was not Obelix, however, but a devout sheikh of a Sufi order from Cairo. In order to enforce the religious ban on images, he cut off the sphinx’s nose.

According to conveyed stories, the angry crowd then killed him. Abd al-Lateef al Baghdad, a historian and doctor from Baghdad, described the Great Sphinx with a nose, which indirectly confirmed the story about the Sufi sheikh. In addition to the nose, the goatee has broken off.

Parts of it are now exhibited in the British Museum in London,