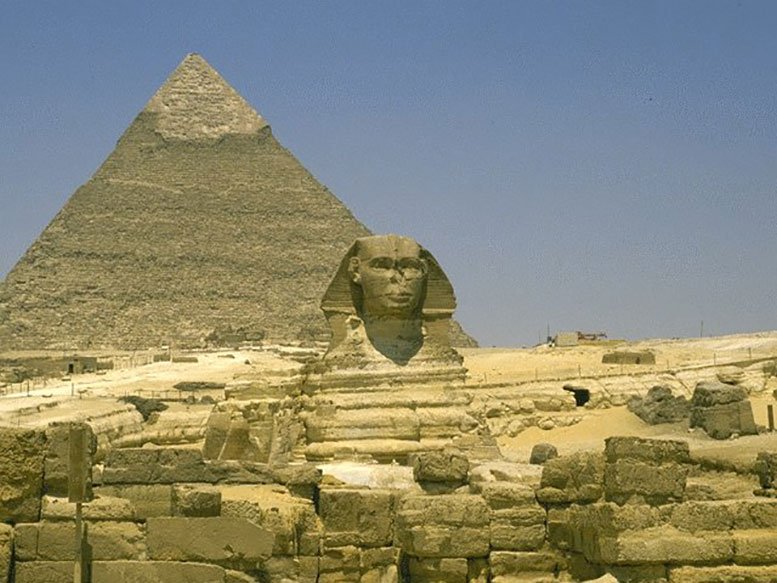 In addition to the Sphinx Valley Temple, another contemporary witness joins below the Giza plateau: the Great Sphinx, which sits majestically in front of the graves of its alleged builders.

The Sphinx in Giza is therefore not only the most prominent, but also the largest Sphinx in Egypt. The proximity to Cairo makes a visit to the Sphinx and the pyramids almost a must when visiting Egypt.

The Sphinx was uncovered mostly by Giovanni Battista Caviglia in 1818. Fragments of the beard of the huge monument were found, but the remains of the chipped nose are missing till today.

There are various theories existing as to how the nose got lost. One of these theories states that a fanatic sheikh suffering from iconophobia is said to have cut off his nose.

But this could never be proven. According to rumours, soldiers of Napoleon Bonaparte destroyed their noses during target practice, but this turned out to be wrong because Napoleon Bonaparte himself had a great affinity for Egypt; he described the country as the “cradle of science and the arts of all mankind” (l’Égypte – le berceau de la science et des arts de toute l’humanité). In addition, scientists were already drawing the Great Sphinx without a nose at that time.

Due to the rainier climate in Egypt in the past, there were increased signs of erosion on the Sphinx. Another cause is believed to be a drainage channel that led down from the Chephren pyramid and led into the area of the Sphinx. However, this channel was later closed.

The importance of the sphinx and the purpose for which it was built still remains a mystery till today. It is obvious, however, that the construction of the Great Sphinx was ordered by Cheops himself and should therefore also represent the pharaoh in Horus form.

Elsewhere, it is believed that the sphinx serves as the guardian of the pyramids. However, its dimensions alone suggest an important role. The lying lion body with the human head has a length of 73.5 meters, is six meters wide and twenty meters high and was made out of a limestone hill,