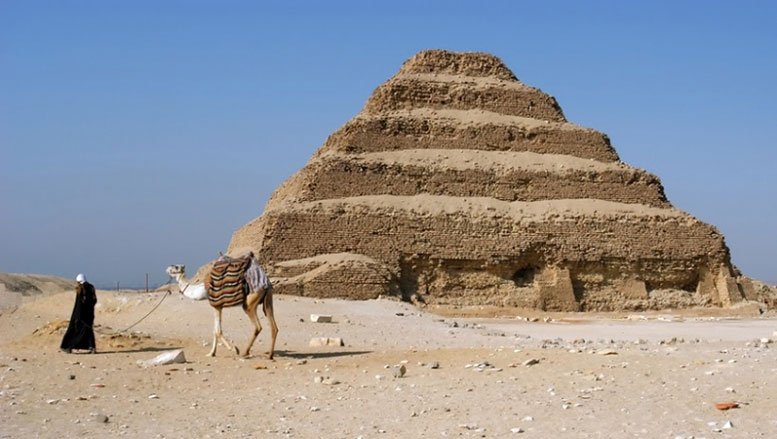 The ancient Egyptian necropolis Sakkara is located 20 kilometres south of Cairo at the west bank of the Nile.

Almost 20 pyramids and monumental tombs are located there. It houses numerous graves of high officials, which are covered with amazingly well-preserved inscriptions and hieroglyphs.

The painted walls tell the life story of the deceased. But the central monument of Saqqara is the step pyramid of Djoser, which has been part of the UNESCO World Heritage Site since 1979.

It is probably the oldest pyramid in ancient Egypt and is considered the oldest monumental building in the world. With it, the monumentalization of the royal tombs began.

Sakkara was already known as a burial site during the Old Kingdom. The death god Sokar was probably the godfather for the name given to the necropolis.

The oldest tombs, which are several Mastabas, have been found in Sakkara-Nord. Mastabas resemble the shape of a truncated pyramid, but only have a relatively low height and sloping side walls with a flat roof.

During the later second dynasty, the burial of the first kings took place south of Saqqara. Of these only the underground burial chambers can be seen today.

Already towards the end of the second dynasty, countless mastabas were found in the necropolis. King Djoser, who is assigned to the third dynasty, basically founded the construction of pyramids with his step pyramid around 2650 BC.

As the necropolis of the residential city of Memphis, many prominent officials are buried there, but the kings of the fifth and sixth dynasties also had their pyramids built in Saqqara.

The architectural tradition of the Old Kingdom was continued during the first period, during the Middle Kingdom rather small mastabas were scattered around the pyramid of Teti II and in the very south of Sakkara.

The New Kingdom brought an uplift for Saqqara; the necropolis was of particular importance. Especially during the reign of Amenophis II, many officials were buried in Saqqara.

The grave complexes differ from the mastabas in their construction, they rather resemble small temples and are largely in poor condition. Only a few graves can be assigned to the third period, whereas in the late period many officials were buried in impressive grave.

Sakkara was significant as a necropolis until the Ptolemaic period, because temple complexes were still being built at that time. Even animals found their final resting place in Saqqara in the form of extensive graves.

With that saying the construction of pyramids has its roots in Sakkara with the step pyramid of Djoser, has been refined and perfected over the centuries and finally led to the pyramids of Giza, which are still considered an architectural marvel and a masterpiece of craftsmanship,