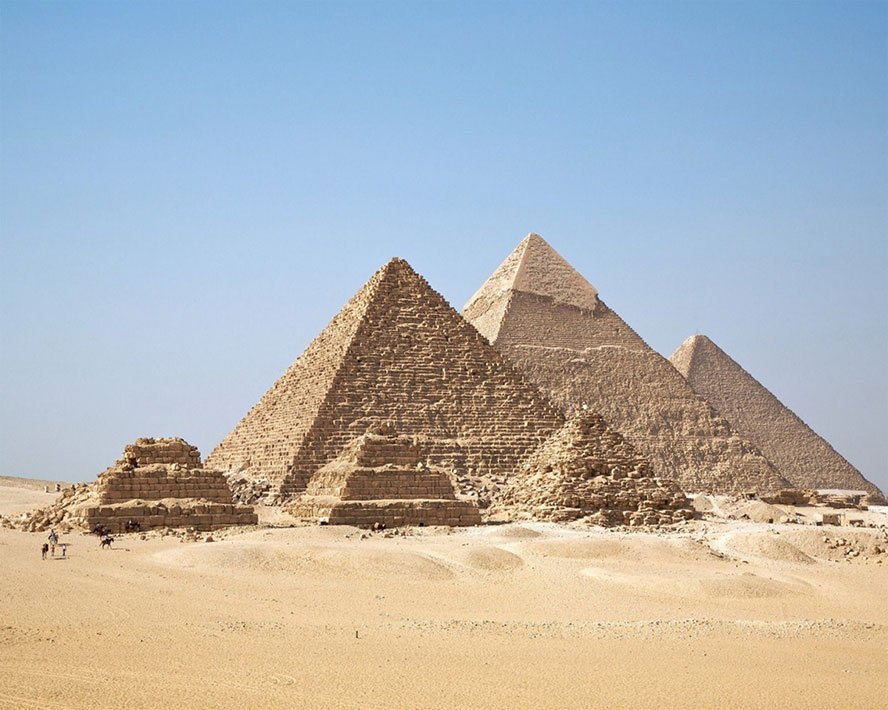 Pyramids originated around 2500 BC & located 15 kilometres from Cairo

Pyramids, It’s not too much to say that everyone knows them. They are the topic of countless documentaries, appear in films and are a – if not the – symbol of Egypt.

The Giza pyramids. They take one’s breath away and are visible from afar, as if being from another world. The mere thought of their age has the ability to cause intense goosebumps.

They are much more impressive and larger than what could ever be shown in a documentary or in a photo. Being among the wonders of the ancient world is for a reason – and they are the last existing monument of this size.

They originated around 2500 BC and are located 15 kilometres from the center of Cairo.

The mighty limestone plateau on which the monuments were built, measures around two square kilometres and offers a great view of Cairo.

Although the wheel was probably already known to the Egyptians back then, apparently no vehicles were used to build the pyramids.

The transport was most likely carried out on wooden sledges, however the way the tons of stones were ultimately put into their place cannot be said validated till today. There are different explanatory approaches, but none of them can be proven.

The largest and certainly best known pyramid is the Cheops pyramid. Its former golden tip  disappeared irretrievably in the turmoil of history. It used to measure 146 meters, but is now only 137 meters.

Around 3 million stone blocks were used for the pyramid, with a single stone block alone weighing 2.5 tons.

Inside the pyramid there are even blocks that weigh around 40 tons, which were were carved out of the rock with primitive tools.

The pyramid consists mainly of limestone, the cladding was made of white Tura limestone, but this was almost completely removed during the Middle Ages. Cheops had the pyramid aligned in four directions.

The accuracy with which work was carried out at that time is till today simply astonishing. Little is known about Cheops himself, and his fame is mostly due to his building – the pyramid. He was the second pharaoh of the ancient Egyptian fourth dynasty of the Old Kingdom and his reign is dated around 2620 to 2580 BC.

It is not entirely clear whether Snofru, whom Cheops succeeded, was his father or stepfather. The only existing representation of Cheops is a 7.5 cm figure made of ivory.

pyramid is the middle one of the three pyramids. It appears higher than the Great Pyramid of Cheops, which is due to its steeper angle of inclination and its somewhat higher position.

It is though considered the second highest of all pyramids within Egypt and was built around 2550 BC. The slope of the terrace was balanced out by digging the steps of the base into the existing rock and elevating the opposite side.

With looking closer, it quickly becomes clear that the construction of the Chephren pyramid was less precise than that of the Cheops pyramid.

The exterior of the pyramid also suggests poorer craftsmanship; the joints are very wide, the mortar is often missing. However, the remains of the cladding can still be seen at the top.

Ramses II used parts of the limestone cladding to build a temple in Heliopolis, and other parts were used in the 14th century to build the Sultan Hassan Mosque.

When studying the pyramid, Italian experts also noticed a sharp shift in the corner edges, which probably can be ascribed to an earthquake.

Chephren himself was the son of Cheops and fourth pharaoh of the 4th dynasty of the old empire. He succeeded his half-brother Radjedef and ruled from 2570 to 2530 BC.

As with Cheops, little information exists about Chephren. A double mastaba in Giza on the east cemetery proves his existence.

is the smallest of the three pyramids in Giza. It measures only 65 meters and is therefore not even half as high as the other two pyramids.

This was due either to space problems on the Giza plateau, to too much construction work or to the increased focus on the sun cult which resulted in more temple building for the sun god.

The Mykerinos pyramid consists of limestone, which was found on site, but only a little has been preserved from its cladding aside from the top.

The granite slabs used in the lower 16 meters are largely unfinished, which is probably related to the death of the pharaoh before its completion.

is the son of Chephren and was the throne successor, but probably only after his cousin Bicheris reigned in between.

Mykerinos was the sixth king of the fourth dynasty in the Old Kingdom and held the throne from 2530 to 2510 BC. Like his father and grandfather, he is mainly known for his building, other than that there is not much reference about him,

Pyramids originated around 2500 BC & located 15 kilometres from Cairo
Pyramids