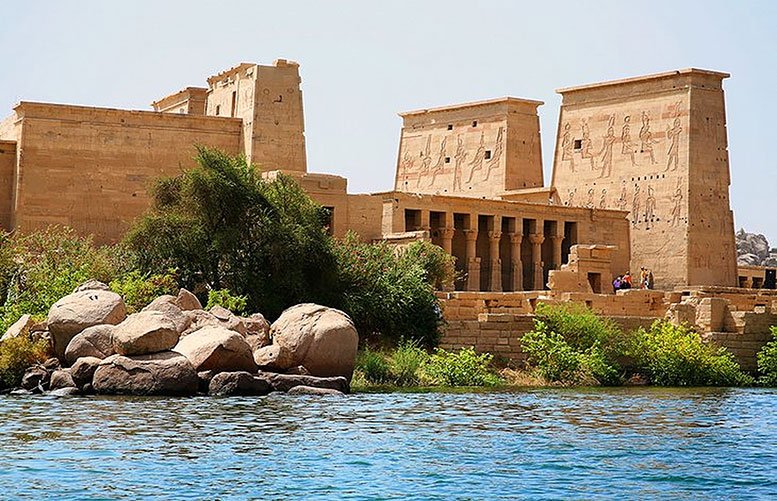 Its reputation preceded the temple: the Temple of Isis on Philae temple was considered of being the Pearl of the Nile. It is located around eight kilometers south of the city of Aswan in Upper Egypt on the island of Agilkia.

The original location of the temple, the island of Philae, could not be maintained because it was within the area of what is now Lake Nasser.

The massively growing population made all season cultivation of agricultural land next the Nile necessary and also the annual flooding through the Nile should be contained. In the years 1960 to 1971, a new dam was therefore planned, which caused Lake Nasser to rise 60 meters more.

The 35 settlements in this area were relocated to Kom Ombo and Aswan. But it was also important to move the archaeological sites to other places. In 1964, the largest rescue operation in the history of archeology was launched by UNESCO.

Most of the monuments were documented, found their place in museums or – like the Philae Temple – were relocated. However, not everything could be saved: fortresses or rock temples and graves, but also mosques and localities sank in Lake Nasser.

The island of Agilkia, on which the Philae Temple found its new place, is about 600 meters further north on higher ground. Since the nature of Philae Island was different from that of Agilkia Island, a topological adjustment became necessary.

The most important monuments, including the temple, were sawn into 37,363 parts weighing between 2 and 25 tons and rebuilt on Agilkia, but without the foundations of the temple.

Since the 26th Dynasty, Philae Island has been a place of worship for Isis, the goddess of birth, rebirth and magic. It was one of the most important pilgrimage sites in Egypt in the late period.

The main building of the temple complex was therefore directed to the goddess Isis and is located on the west bank of the island. Other small monuments are arranged around this temple.

The main temple of Isis was built from Ptolemy II. onwards. Its construction took over seven centuries and served not only as a place of worship for the Ptolemies, but also for the Bedouins resident there.

Although the Roman emperor Theodosius later declared Christianity to be the state religion by edict, the Temple of Isis was firmly in the hands of its followers.

Emperor Justinian I. finally closed the temple by force and then converted it into a church. As a result, a Christian community settled here, which lasted until the 12th century; other churches followed.

Although questionable ethically and morally, the relocation of the archaeological sites had one advantage: it drew public interest to the area and thus significantly promoted the development of the region,