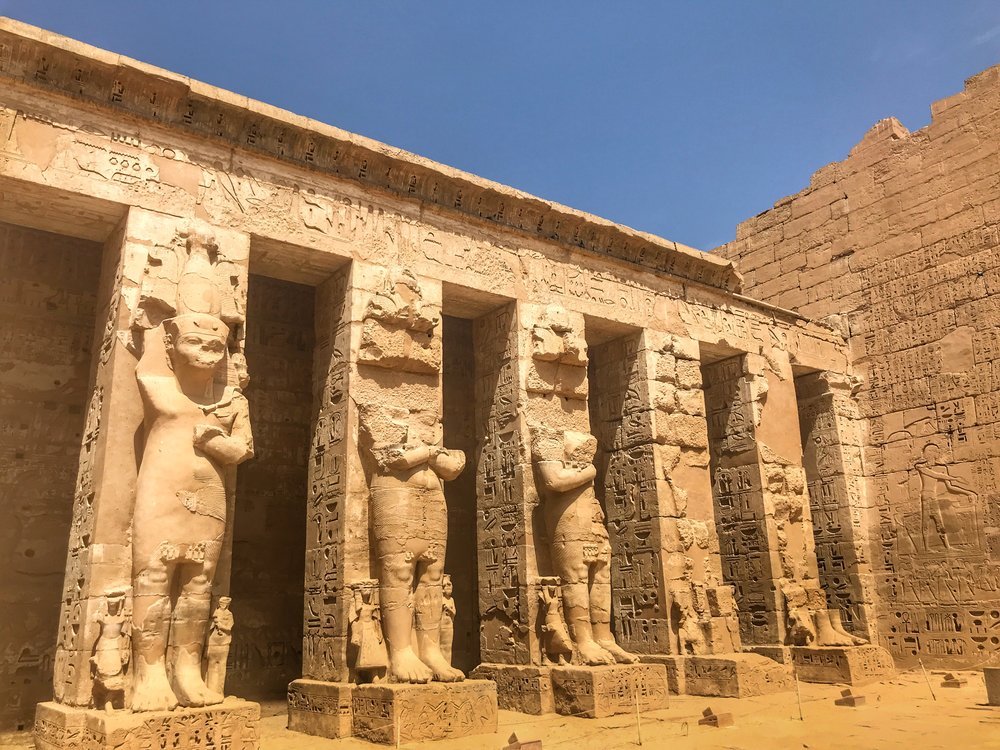 Medinet Habu, The Mortuary Temple of Ramses III. is located across from Luxor as part of the necropolis in Medinet Habu.

The cult building, built as a million-year house, was used in particular to worship the god-like pharaoh. In addition to the main temple, the temple complex also includes other monuments: an Amun temple, funerary chapels of the wives of Amun and the Holy Lake.

The so-called “High Gate” is the main entrance, the well preserved wall reliefs show the downfall of the pharaoh’s enemies. Rooms above the main gate were used by Ramses III. himself. A quay was once located in front of the gate, which ensured shipping on the Nile from Medinet Habu.

The passage to the forecourt of the mortuary temple within the surrounding wall is framed by two tower-like buildings, inside the passage itself there are two statutes of the goddess Sachmet.

In the northwest, shortly after the gate to the forecourt of the temple of Ramses III. are the tomb chapels of the wives of Amun, to the northeast is the Amun Temple, the oldest building in the temple complex.

The palace joined with the actual mortuary temple and served as a residence for both this world and the hereafter.

The first courtyard is lined on the right by Osiris pillars, on the left a colonnade of columns defines the temple and the cult palace behind. The second, somewhat smaller pylon is followed by the second courtyard. It is symmetrical and smaller.

Its passages at the front and back are dominated by eight Osiris pillars. Five columns are on the right and left in the shape of papyrus rolls. The last part of the mortuary temple is the place of the holy sacrament, which is surrounded by formerly roofed rooms. Two groups of rose granite statues mark its place.

The special feature of the mortuary temple in Medinet Habu are the numerous reliefs, in which the former painting can even still be seen.

Mainly reliefs of war decorate the walls on the inside of the temple, the reliefs on the outside walls are also still in good condition; the relief of wild bull hunting as well as the land and sea battle against the sea peoples should be mentioned here.

Excavations around the temple at Medinet Habu near Luxor brought an entire city from the Pharaonic era to light. What makes it unusual: the west side of the Nile was actually considered the realm of the dead in ancient Egypt,