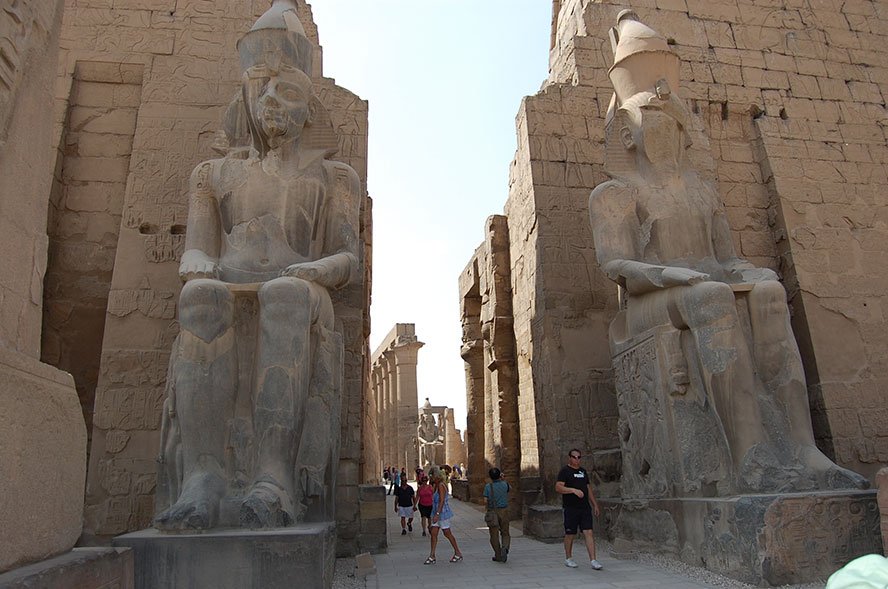 The Karnak Temple is the largest temple complex in Egypt and has been repeatedly rebuilt or expanded. Since 1979, the temple, together with the Luxor temple and the Theban necropolis, has been part of the UNESCO World Heritage.

This magic is so present in the hall of the Karnak Temple that the sudden emergence of an Amun priest behind one of the huge pillars would not be a big surprise.

Where the name “Karnak” originates is not known. It is believed to be due to the existence of a wall surrounding the village, thus meaning fortress or fortified village.

The former village is therefore the namesake of the temple. Karnak as a town was south of today’s temple.

The Sphingen alley, which connects the Karnak with the Luxor temple, leads through the former village. During the 20th century, construction took place north of the temple that represents New Karnak.

The earliest evidence of the existence of the Amun cult in Thebes is assigned to the Middle Kingdom. During the 11th dynasty Amun rose to the local deity of Thebes. Changes of the temple were carried out even during the Greco-Roman period.

The Temple of Amun-Re has existed since the 11th Dynasty and was considered a chosen place in the Pharaonic period.

It is the largest Egyptian temple, while it is not really a classical temple than rather several different sacred buildings that were built together.

Over time, parts of the temple were torn down to use the building material for other purposes. Only the center of the temple has remained untouched until today.

The temple of Chons is a temple dedicated to the god Chons which is also located in the temple district of Amun. Chons was known as the son of the fertility god Amun and the goddess Mut. Its temple measures 80 meters long and 30 meters wide.

Ipet, who was also honored with a temple, was the goddess of birth and mother of Osiris. She is also considered the mistress of magical protection and was regarded as being equivalent to Hathor.

The district of Amun also includes the following facilities:

With an almost square area (151 mx 155 m), the District of the Month is right next to the large district of Amun-Re.

The Mut district is located approximately 350 meters south of the Amun-Re temple and covers almost 90,000 square meters with approximate side lengths of 250 and 350 meters.

The two temples were connected by an avenue of sphinxes. The Temple of Mut is also surrounded on three sides by the Holy Lake,