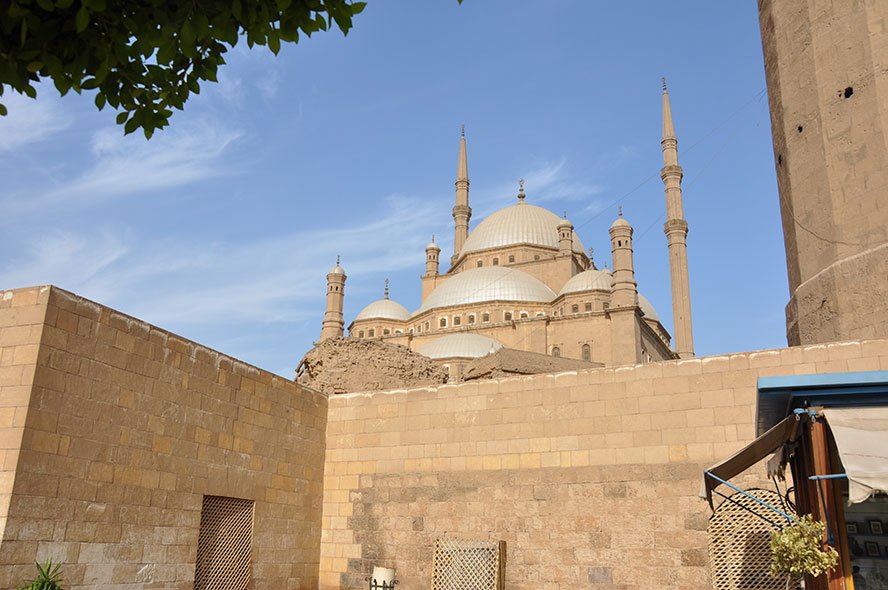 Islamic Cairo, The city of the dead, which is just right below the Mokattam Mountains, is home to around 300,000 people and part of the Islamic old town of Cairo. It has been a UNESCO World Heritage Site since 1979.

The historic city center is home to numerous sightseeing places, including the Saladin Citadel with its integrated alabaster mosque (Muhammad Ali Mosque) as well as the famous Khan el-Khalili Bazaar.

The Alabaster Mosque is one of the biggest mosques in Cairo and was built under Pasha Muhammad Ali.

After a powder explosion in 1824, part of the destroyed Citadel of Saladin was replaced by the Alabaster Mosque.

The colloquial name was derived from the magnificent alabaster-clad walls inside the Muhammad Ali Mosque. The citadel itself is located on a hill, at the foot of it is the Islamic old town with the Sultan Hassan and Ibn Tulun mosques.

The latter is considered to be the oldest mosque in Cairo, which has been preserved in its original form. It is not only the oldest, but also the largest mosque with over 26,000 square meters.

The namesake Ibn Tulun built the place of worship in the 9th century, which was also the center of the Tulun dynasty. Ahmad Ibn Tulun was the founder of the Tulunid dynasty in Egypt and ruled from 868 to 884.

The extraordinary building and its surroundings can be perfectly seen from the spiral minaret. Another great mosque in Cairo’s Islamic Old Town is the Al Azhar Mosque.

It is not only of great spiritual importance, it is also still considered as one of the central institutions of Sunni Islam. It was the second mosque to be built in Cairo. Al Azhar University, under which the mosque is subordinate, is the spiritual seat of Sunni Islam and Islamic law.

From here, verdicts or judgments are mostly adopted throughout the Muslim world. The mosque is therefore like no other a symbol of islamic Egypt.

One of the highlights of the old town is certainly the Khan al Khalili bazaar.

The name of the bazaar goes back to its founder Emir Jarkas al Khalili, whose hometown was Hebron (Arabic: al Khalili). With its winding streets, the souk from the late 14th century is one of the attractions of Cairo and has not lost its oriental charm.

The spirit of the Orient is still alive in it, the shopkeepers are reminiscent of the former traders from 1001 nights,