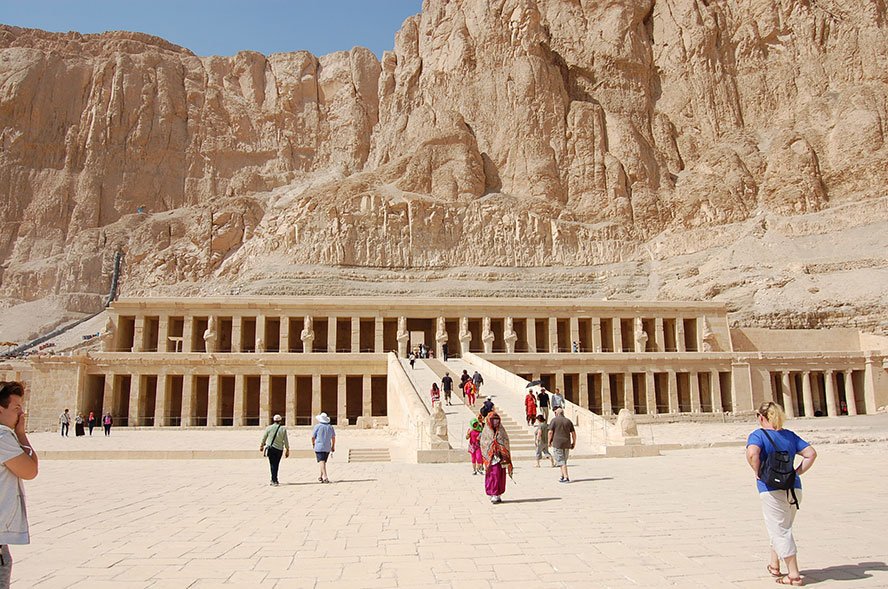 Hatshepsut Temple, Hatshepsut was a female pharaoh in ancient Egypt who belonged to the 18th dynasty.

She was the daughter of Thutmose I and his wife, Queen Ahmose. Hatshepsut was born around 1495 BC. Her name means “The one who leads the noble ladies”.

Hatshepsut married her brother Thutmosis II, who died early. With a concubine he had Thutmosis III, who was only two or three years old at the time of the death of his father.

The stepson of Hatshepsut was thus the legal successor of his father, but Hatshepsut took over the interim government.

After a few years of her temporary rule, she actively took power and appointed herself as pharaoh.

Although the young Thutmosis III. was officially the co-ruler, the threads ran together at Hatshepsut; she alone led the politics of Egypt.

In order to protect herself against possible critics and to declare her reign as legitimate, she announced the Egyptian god Amun as her father. Her divine procreation can be seen on the walls of the legendary mortuary temple. Hatshepsut ruled for around twenty years.

During this time she became more and more a male pharaoh; her breasts disappeared and she had an artificial goatee. Egypt flourished under her economically, while she was concentrating particularly on architecture and trade, she imported gold, frankincense and ivory from Punt, which is probably today’s Somalia or Eritrea.

Hatshepsut Temple was built over a period of around 15 years. The steward Senenmut was the architect of the impressing building.

The unusual architecture of the temple differs from the classic temples, which usually follow a certain pattern in their structure: 1st pylon – 1st courtyard – 2nd pylon – 2nd courtyard – portico. In the Hatshepsut temple, the pylons were replaced by pillar halls.

The adjoining courtyards are constructed in ascending terraces and connected by ramps.

An approximately one kilometer long processional road leads to a large courtyard, where the first portico, a columned hall facing east, is located.

It is framed on both sides by two colossal statues of Hatshepsut. The depictions on the walls of the left portico show the production, transport and installation of two obelisks in the Karnak temple, on the walls of the right portico the focus is mainly on hunting scenes; it is therefore also called the hunting hall.

A ramp in the middle leads to the first terrace, which is divided by another ramp, which again leads to the second terrace. The Punt hall forms the second portico on the left side of the ramp, where the wall depictions show a commercial expedition to Punt.

The Hathor Chapel is located next to the Punt hall. The depictions on the right side of the portico show the divine birth of Hatshepsut. The Anubis Chapel adjoins him on the right.

On the second level there is a portico directly in front of the actual terrace. There are 26 statues of Hatshepsut here. The work of her stepson is very clear at this point: the west wall was once decorated with a larger text under Hatshepsut’s reign.

had it replaced by other reliefs. The southern and northern walls are decorated with ritual runnings.

The courtyard of the second terrace is also considered a festival courtyard. Here the representation of the procession decorates the wall during the valley festival,