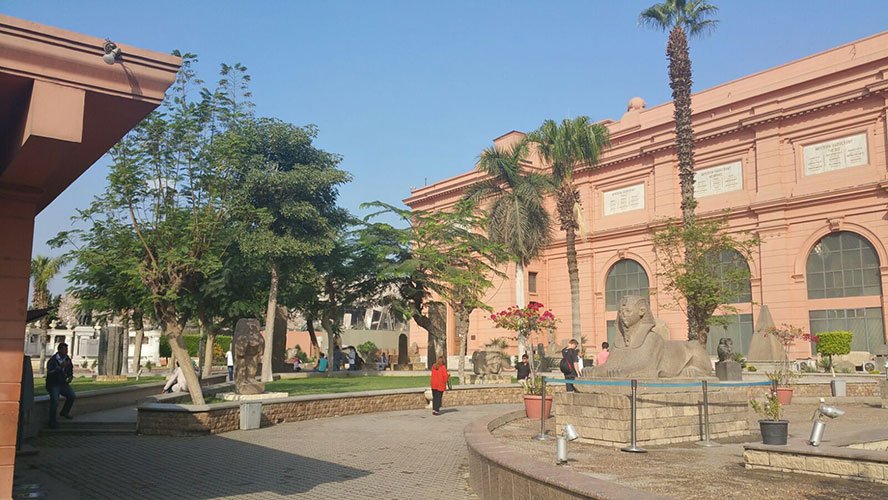 Not far from the Tahrir Square is the Egyptian Museum; it is both a treasure trove of ancient Egypt and a journey through time to a former highly developed culture.

Egypt was confronted with the large plunderings of its precious finds by local and foreign treasure hunters.

In order to defend itself against this and to prevent further plundering of this kind, the government founded the Service des Antiquités de l’Egypte in 1835.

This was the basis of the first collection of ancient Egyptian art. In 1858 the Frenchman Auguste Mariette founded a museum to store the grave finds in Bulaq.

However, the museum was quickly overcrowded due to the mass of finds. The regular flooding from the nearby Nile also increasingly endangered the collection.

In 1897, the foundation stone was laid for a new museum. It took four years to build the 15,000-square-meter Egyptian Museum, which cost 240,000 Egyptian pounds. In 1902 the artifacts were finally brought to Cairo over the Nile river.

The official opening of the Egyptian Museum as we know it today took place on November 15, 1902. Since 2010 there is also a children’s museum in the Egyptian Museum, which teaches children the history of Egypt in a child-friendly way.

The walls of the neoclassical-style building are packed with over 100,000 exhibits, with even more in the inaccessible basement and on the second floor.

The highlight of this collection are most likely the objects around the famous Pharaoh Tutankhamun, which includes his impressive mask made of around ten kilograms of solid gold.

The Egyptian Museum is also the resting place for the mummies of many pharaohs from the New Kingdom, such as Amenophis, Thutmosis and Ramses for example, as well as countless other grave goods and artefacts from the Middle Kingdom.

This also includes items which were discovered during excavations in other parts of Egypt. The finds are arranged in chronological order on the ground floor of the museum.

The artefacts of the New Kingdom with the statues of Amenophis II and III. and Thutmosis III. consume most space. In the north gallery is the Amarna Hall with Akhenaten, the head of Nefertiti and paintings, in the south half finds from the Old Kingdom, which include a statue of King Cheops.

The center hall focuses on Hatshepsut and the Palace of Amarna. In the east wing of the Egyptian Museum there are monuments from the late and Greco-Roman times.

Jewellery from several eras is exhibited in the north wing, while the west wing shows coffins from different periods. In addition, around 600 sarcophagi are waiting to be processed in the basement,