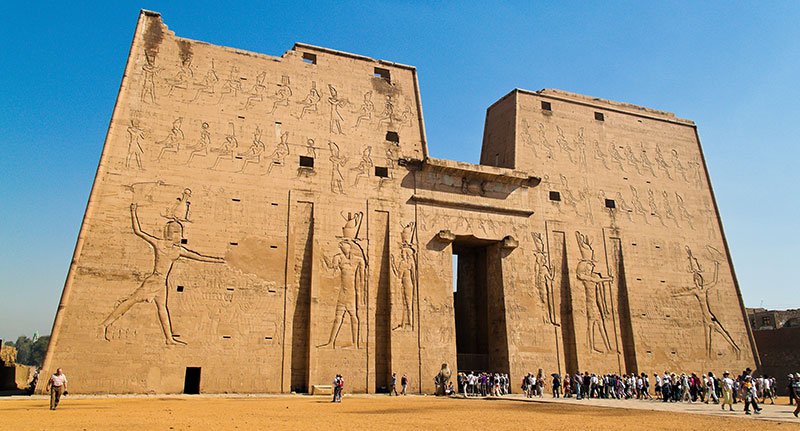 Edfu Temple, Located around 85 kilometers south of Luxor, the Temple of Edfu is in the West of the city of Edfu in Upper Egypt. The temple there is one of the best preserved in Egypt.

It was dedicated to the “Horus of Edfu”, the local god Hor-Behdeti, and was built during the Ptolemaic rule in Egypt. The term “Behdeti” can be assigned to the description of the region as “southern Behdeti”. Hor-Behdeti was part of one of two triads of local faith, forming a triad with Hathor of Dendera and Ihi, while Isis, Harsomtus and Harsomuts-pa-chered formed the other. Horus also embodied other deities in Edfu. Edfu was the capital of the second gau in Upper Egypt, where according to the legend Horus won an important fight against Seth.

In Ptolemaic times, the temple of Edfu was primarily a place of important festivals. In addition to the New Year, this included the wedding of Horus of Edfu with Hathor of Dendera. The celebration of the victory of Horus over Seth also took place here.

The temple was built in 237 BC and founded in the tenth year of Pharaoh Ptolemy III Euergetes I’s reign.  The further construction work on the temple by his successor Ptolemy IV. was interrupted by riots which broke out as a result of the reign of the opposed kings Harwennefer and Anchwennefer.

Ptolemy VI. continued the construction around 30 years later, but it was not until Ptolemy VII. that the temple of Edfu was finally completed. He ultimately consecrated the temple sanctuary in 142 BC.

During the subsequent rulers, other structural changes were made to the temple, such as the moving forward of the portico or the construction of the courtyard with a pylon by the rulers Ptolemy IX. and X.

After 180 years of construction, 57 before Christ during the reign of Ptolemy XII. the work was eventually being ended. Finally the temple was 137 meters long and 79 meters wide.

A 36 meter high pylon is located at the entrance, which consists of two towers. The forecourt of the temple is framed by 32 columns, on three sides in the form of colonnades.

The fourth side of the courtyard is the entrance to the actual temple. The portico of the temple building has a width of 25 meters, is almost 14 meters long and has 18 columns.

A second portico is located behind it. The divine coronation of Ptolemy IV can be seen on its eastern wall. The second columned hall leads into the sanctuary to the “middle hall”, which represents the center of the temple.

Here is the so-called Sancta Sanctorum, which is considered to be the holy sacrament and is an independent building. The picture of the main god was kept here in a gray granite block, a so called naos.

The good condition of the Temple of Edfu can mainly be attributed to the fact that the temple was covered with sand for most of the time.