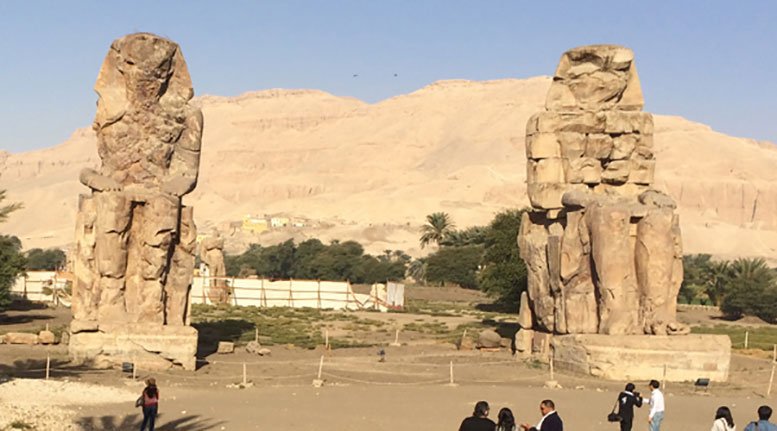 The Colossi of Memnon are not far from the Valley of the Kings. They are two colossal statues of ancient Egypt, originally opening the temple of Amenophis III, a pharaoh of the 18th dynasty.

Their construction is dated to the 14th century BC. The colossi are incorrectly named after King Memnon, who occurs in Greek mythology.

This can be attributed to the breeze that took place in the morning at sunrise and passed through a crack in the statue at the time of the greatest temperature difference between the outer layer of air and the air trapped in the pores of the stone.

Thus it produced a sound which was regarded as a greeting from the mother of Memnon to Memnon himself.

The two statutes represent Amenophis III. sitting on a throne, his hands resting on his knees, looking towards the Nile. His face is no longer recognizable, nor is the crown on his head.

The Nemes headscarf is still well preserved. Both statues are framed by female figures; the one on the right is his wife Teje, on the left is the mother of Amenophis III, Mutemwia. Between the legs of Amenophis were small statues that represent an unknown daughter, but they are badly affected and are therefore barely recognizable.

On the sides of the throne wall paintings show the unification of the empire: Hapi, the god of the Nile flood, ties together lotus plants with papyrus bushes.

The former symbolize Upper Egypt, while the latter stand for Lower Egypt. The origin of the building material is also shown: the Gebel al Ahmar quarry on the Nile bank northeast of Cairo has been the source. According to recent studies, however, the material originates from the western bank of the Nile near Aswan.

The statues are impressive from afar; they are almost 18 meters high and overlook the Nile. At 18.36 meters, the northern statue is slightly higher than the southern one (17.27 meters).

If the previously existing crowns are included, the statues were originally around 21 meters high. The bases of the statues are enormous: 10.50 meters x 5.50 meters at a height of 3.30 meters, with half of the base sunk into the ground.

An investigation conducted in the early 1970s was to determine the approximate weight of the colossi. Using the stone material, the southern statue was calculated at 720 tons, the base at 500 tons.

Although the colossal statues are now viewed more as individual monuments, they once stood at the side of the entrance to Amenophis III. mortuary temple. It was located behind the statues on an area of 700 meters length and 550 meters width.

The main building material used was clay, which made the temple less resistant to weather influences.

Above all, the annual flooding of the Nile severely damaged the temple. Around 1200 BC most of the temple was already gone. Parts of the ruins were also exploited by later pharaohs to build their own temples.

The Egyptologist Flinders Petrie found references of the statues on a stele on which Amenophis III. described the colossi. The temple of Amenophis III. was already from about 332 BC. on not existing any more. Why the Memnon colossi show severe damage could not be clarified fully. Either the Achaemenid king Kambyses II or possibly an earthquake caused it,