HomenewsAswan attractionsAswan is the southernmost city in Egypt and is therefore also called “Gateway to Africa”. 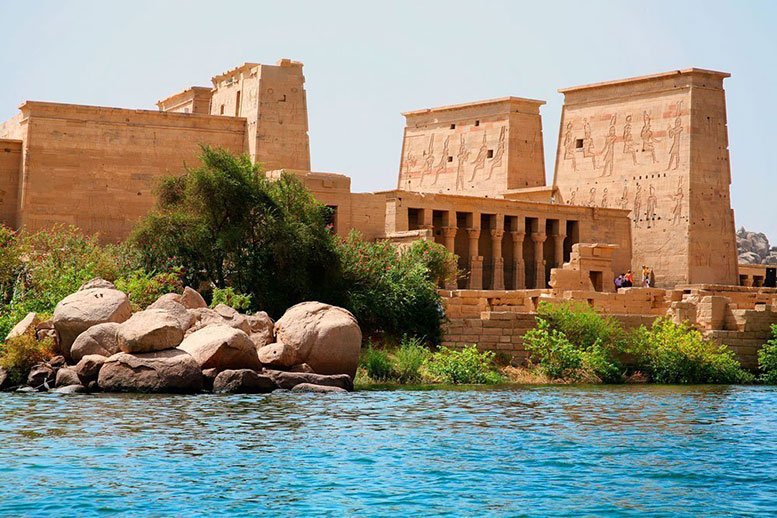 The city lies below the first cataract on the eastern bank of the Nile. Egypt practically ends here, Nubia begins.

Because of its dry climate, Aswan has been already valued in the past as a health resort. Especially sand baths against all types of joint diseases were a popular form of therapy.

Aswan was of great importance as a supplier of granite and rose granite, which was mined by workers at great expense in the nearby quarries and then shipped north over the Nile. In addition to statues, obelisks were pounded out of the rock and delivered in finished form. The famous unfinished obelisk is an unfinished rose granite obelisk.

Before its completion, it showed cracks in the rock and was therefore probably not completed. With its height of 41.75 meters on a square base of 4.2 meters and an approximate weight of 1168 tons, it would have been the largest obelisk in ancient Egypt.

The quarries of Aswan extended to the island of Philae and have been under the protection of UNESCO as a World Heritage Site since 1979.

The idea that these handcrafted achievements were performed with the most primitive means thousands of years ago gives the unfinished obelisk a great historical charisma.

A building that is almost as impressive as it is economically important is in the immediate vicinity: the Aswan Dam. The high dam, built in 1970, dams the Nile over a length of around 1.9 kilometers and thus forms the 5250-square-meter Lake Nasser. The huge lake was originally created to protect Egypt from major economic damage in case of droughts.

However, the construction of the Nasser dam had consequences for the numerous monuments that were nearby. Even an entire village had to be given up, its residents were relocated.

The remains of this village can still be found on the bottom of Lake Nasser today. In view of the rising floods, dozens of threatened monuments had to be saved by UNESCO in complex implementation processes.

These included the famous Philae Temple and Abu Simbel. The Philae Temple is therefore no longer in its original location, but on the higher Agilkia Island and was rebuilt there. The main building is the temple of the goddess Isis, which is located on the west bank and is surrounded with several smaller buildings. The Philae Island was eventually flooded as a result of the dam construction.

The Aswan Botanical Garden is located on Lord Kitchener’s Island. The island impresses with its lush vegetation, which goes back to the former owner of the island, Horatio Herbert Kitchener.

He arranged the planting of various exotic trees and flowers, which formed the basis for today’s botanical garden.

As the southernmost point of Egypt, Aswan escapes the usual tourist flow and offers the historically interested visitor not only a glimpse into the Egypt of the pharaohs and kings, but also into the more recent past of the last century with its high dam and Lake Nasser and more

Aswan is the southernmost city in Egypt – Gateway to Africa
Aswan