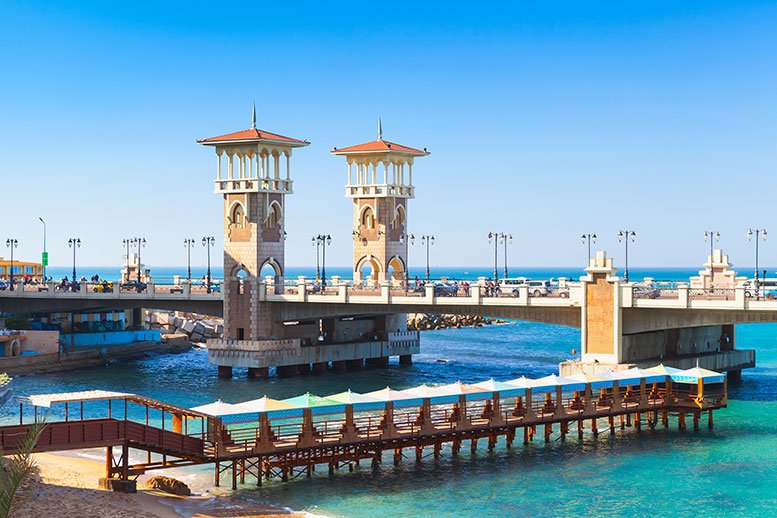 Alexandria – the pearl of the Mediterranean with an extension of more than 32 kilometers on the coast is the second largest city in Egypt after the capital Cairo.

It is the only metropolis with a direct access to the Mediterranean Sea. Most of Egypt’s foreign trade is handled through its port.

The city’s founder and namesake was Alexander the Great, which is why the Greek “Polis” Alexandria was not considered part of Egypt during the Hellenistic period.

Its namesake, Alexander the Great, found its final resting place in a golden sarcophagus in the royal mausoleum, which was probably located on the site of today’s Nebi Daniel Mosque.

The Corniche is the promenade that borders the Mediterranean Sea with a view towards Europe.

Although the multi-lane main street is right next to it, the Corniche is still nice for a walk. While the Qaitbay Citadel is at its western end, the famous Montaza Palace is at its eastern end.

The Qaitbay Citadel is located on the east side of the Pharos Peninsula and is connected to the mainland by a dam. The citadel was built as part of the defense strategy against the Ottomans.

One of the ancient wonders of the world once was near the peninsula: the lighthouse of Alexandria. It was considered the tallest lighthouse ever built.

The famous Pompeius column, which is one of the largest monolithic statues in the world, is located in the southern part of Alexandria and rises above the ruins of the Serapeum.

The foundations of the former temple in honor of the deity Serapis are still visible.

As the largest known burial site of the Romans, the underground tunnels of Kom el Shoqafa in the east of Alexandria are one of the last monuments built in honor of the religion of ancient Egypt.

The various architectural styles from the Pharaonic and Greek times that have flowed into the building are particularly obvious in the catacombs of Kom el Shoqafa. In a depth of 35 meters there are impressive tombs and chambers across three levels.

The Bibliotheca Alexandria was founded in 2002 near the ancient library of Alexandria, of which the decay has many legends. Its end can hardly be dated since numerous sources determine very different dates.

The reason for the devastation has not yet been clarified. It was the intellectual center of the ancient world and, with its countless scrolls, it was the basis for sciences during that time.

The ancient library was closely related to the nearby Museion, which provided a spiritual home for artists, scientists and philosophers. T

The library itself can hold up to 8 million books.

At the very eastern end of the Corniche is the magnificent Montaza Palace, which dates from 1892 and has its origins in the smaller Salamlek Palace, which was expanded with the larger Al Haramlik Palace in 1932 under King Fuad I.

Alexandria not only offers a rich historical past that was remarkably influenced by different architectural styles and epochs, but also shows a touch of Europe with its proximity to the Mediterranean Sea and more